On Tuesday July 10, 2007 at 06:49 Hours, Paul Hopfensperger of Body and Mind Studio International® set off from Samphire Hoe, England on the first of three English Channel swims. On board were his wife Beccy, his coach John Stemp, his support swimmer Loraine Verghese, a BBC Radio Suffolk reporter Jon Wright who broadcast live from The English Channel all day and a film crew from Dangerous Films Limited. 13 Hours and 52 minutes later at 20:41 Hours, Paul landed on the beach in Wissant, France. Dangerous Films Limited were filming on behalf of the Discovery Channel for a programme entitled "Human Body: Pushing The Limits" which was first broadcast in 2008. 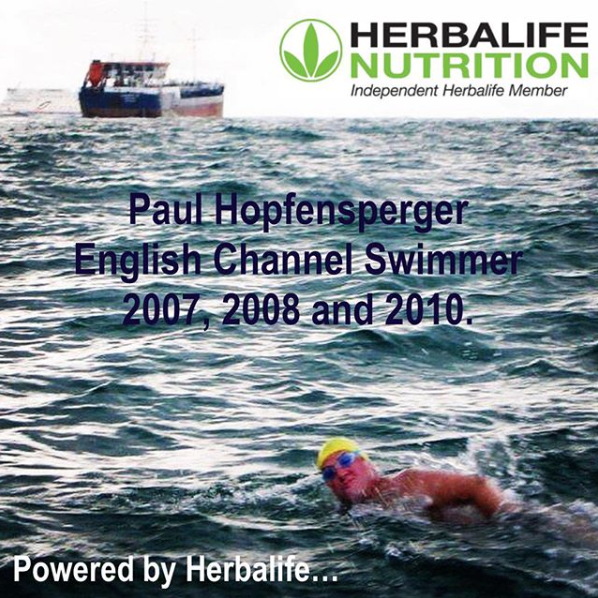 10 hours and 22 minutes into the swim, BBC Radio Suffolk reporter Jon Wright asked Jeremy Turner of Dangerous Films Limited what they were filming:

[Jon Wright]: [...] "It’s not just me on board here, we’ve got obviously his support crew as well, but Paul also brought along a film crew, all the way from London to err, take a few shots of him as he does his channel swim. Jeremy Turner is the director on board the boat here. Jeremy, what exactly are you filming?”

[Jeremy Turner]: “We’re doing a series for Discovery Channel called “Extreme Body”, that’s the working title, and it’s err, exploring how the human body can deal with some of the most extreme conditions on the planet.”

[Jon]: “And swimming the channel is a fairly extreme thing to put your body through. What’s physically happening to Paul at the moment eleven hours in?"

[Jeremy]: “Well not only does he have to complete a twenty plus miles swim, he’s also got to compete with the cold, and those two factors really do stretch the capabilities of the human body, to their absolute extent. So we’re exploring how physiologically he does it through err, using fat as insulation not only for his body but also for his nerves. And also, how the body will turn to fat as a fuel supply when it has to dig deep.”

[Jon]: “So you can swim yourself thin? Probably not a good way of doing it for most people!"

Paul's swim and a more detailed analysis of what happens to the human body during something so arduous as a near 14 hour English Channel swim is featured during the last 15 minutes of DVD 2: STRENGTH which has been personally autographed by Paul.

How does the world's most amazing machine - the human body - perform under extreme situations? Find out in Discovery Channel's Human Body: Pushing The Limits a groundbreaking series that uses cutting-edge CGI (Computer-Generated Imagery) to show just how the body reacts when forced into crisis mode.

Shot on location around the world, this four-part series uses a combination of computer graphics, animation and compelling human interest stories to explore how the human body and brain undergo major changes when pushed into "crisis mode". Among the featured topics are the heightened powers of vision in a lifeguard who is able to spot a swimmer in distress among a crowd of thousands, the strength of an English Channel swimmer who powers his way from England to France in 15 degree water for nearly 14 hours and a firefighter whose life depends on being able to see through roiling black smoke.

DVD 1 | SIGHT - Our eyes are the windows to the world, and over 80% of what we know of our planet comes through them. Learn about your sense of sight from the inside out in this first episode.

DVD 2 | STRENGTH - How does one survive being sucked up by a tornado, or pinned down by a half-ton boulder, or swimming for 14 hours? Witness how the human body - engineered for strength, power and endurance - reacts in a crisis and performs unimaginable feats of strength.

DVD 3 | SENSATION - Uncover the human body's crucial communications network, made plainly visible in this third instalment. What exactly is pain, and how do some people control it? How can fingers move faster than the speed of thought? All this and more revealed in this sensory-stimulating episode.

DVD 4 | BRAINPOWER - It's the most complex, mysterious organ on earth and it resides in your head! Now you can demystify the human brain with state-of-the-art pictures that let us observe how its activity accelerates in times of danger, effectively slowing down time to save us. Now that's mind-boggling!

DVD Format: Region 3 (IMPORTANT: Please check your DVD Player supports Region 3 OR 0/"ALL" DVD format as this unique, Autographed DVD Cannot be returned once purchased. Click on the link to the left if you are unsure).

"Gripping accounts of people who have summoned amazing physical or mental strength.

Our products and services are not intended to diagnose, cure or prevent any disease. If a condition persists, please contact your doctor.