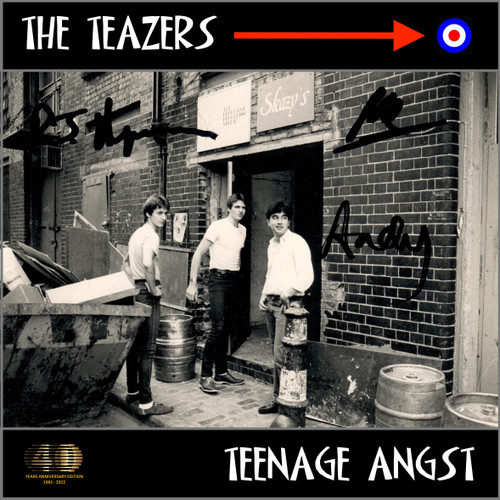 The Teazers - Teenage Angst - Digital Download Only - OR; FREE WITH 12" VINYL E.P.

On a hot July day, Saturday August 7th 1982 to be precise, a three-piece mod band from Bury St Edmunds in Suffolk, The Teazers (16 year old Pete Hawtin, 17 year old Andy Leong-son and 19 year old Paul Hopfensperger), arrived in the city to record four songs written by lead singer and songwriter Paul Hopfensperger. Arriving at The Elephant Recording Studio, Metropolitan Wharf, Wapping Wall in the heart of London's East End, The Teazers descended the metal staircase into the unknown. It was their first visit to a recording studio, and had no idea what was in store that day, or exactly which four songs from their ever expanding repetoir they would record.

The Teazers were greeted by the sound Engineer Chris M. and his pet cat, whose name can be recalled after so many years, then set up the equipment and started to play. Paul had plugged his Rickenbacker 480 guitar into the studio Vox AC 30 Amp, and made a mental note that one day he wanted this guitar/amp combination on a permanent basis. The sound was just awesome! Over the next 8 hours, The Teazers set about recording four of their favourite live tracks.

The Songs - Angst Side

The Songs - Love Side

"The Teazers never officially split up. Andy went off to University in 1983 and we waited and waited and waited. We still wait! I have not seen him once since 1983 but have heard that he has done very well for himself in the corporate world. He was always a very bright lad. Pete I saw once in the bank for about 2 minutes in about 2006? Although I have spoken to him via social media, he keeps himself very much to himself.

The album is for sale on this website for one simple reason, it shows that you should NEVER give up on your dreams. I always wanted to make a record, and here it is - 36 years after we recorded it. It was another of my long term goals achieved as detailed in my motivational talk - "Life is a Channel Swim - Setting and Achieving Goals".

I hope you enjoy these songs, and it catalogues the memories, emotions and teenage angst felt at the time when we all wondered if nuclear war would wipe us out at any time, while struggling with girls, love and the exuberance of youth. Has anything actually changed?".

St Nicholas Hospice Care is a Bury St Edmunds based charity providing help, advice and support to people in West Suffolk and Thetford in the final chapters of their life, who are living with long-term and life-threatening illnesses. Since 2006, Paul and Beccy Hopfensperger have raised money for St Nicholas Hospice Care and 15% of all sales of The Teazers - Teenage Angst will be donated to them (60p per download).

This products is 100% Non-Refundable. Please be aware when purchasing.

This product hasn't received any reviews yet. Be the first to review this product!